In the course of the Civil War, depending on the evolution of the fronts, hundreds of thousands of people had to take the road to exile, whether through the land border crossings or by sea.

The outcome of the Battle of Ebro and the offensive of the national troops on Catalan territory, accompanied by indiscriminate bombing of several Catalan towns, forced hundreds of thousands of the displaced from many areas of the peninsula, soldiers, civil servants and citizens of Catalonia loyal to the Republic, to go, most of them on foot, to the Pyrenees, en route to the neighbouring state. had already received at least three waves of refugees coinciding with the advance of Franco’s troops: in August-September 1936, after the Battle of Irún; in April-October 1937, with the occupation of the Cantabrian coast; and in the spring of 1938, after the occupation of the High Aragon and part of the Lleida Pyrenees. Despite these precedents, the French authorities were not prepared to receive the human avalanche that concentrated on its border in late January 1939 and took a few days to open the border crossings. It was not until the night of 27th and that they authorised entry for the first refugees: women, old men and children. Three days later, they allowed the war wounded to enter and, finally, from 5th February, the soldiers of the People’s Army.

A few days later, on 10th February, the troops led by General Franco were controlling all the border crossings with , with the exception of the area of Coll d’Ares, which held out until 13th February. Franco’s occupation of had ended.

The fate of these hundreds of thousands of refugees varied. After most of them had spent time in the French concentration camps, some returned within a few months to Franco’s , more or less voluntarily, where in some cases they also ended up in prisons and concentration camps. Many liberal professionals, intellectuals and politicians travelled to , especially , while another group of exiles considered more popular, in comparison with the previous, remained in where a few months later they found themselves immersed in another conflict, the Second World War. 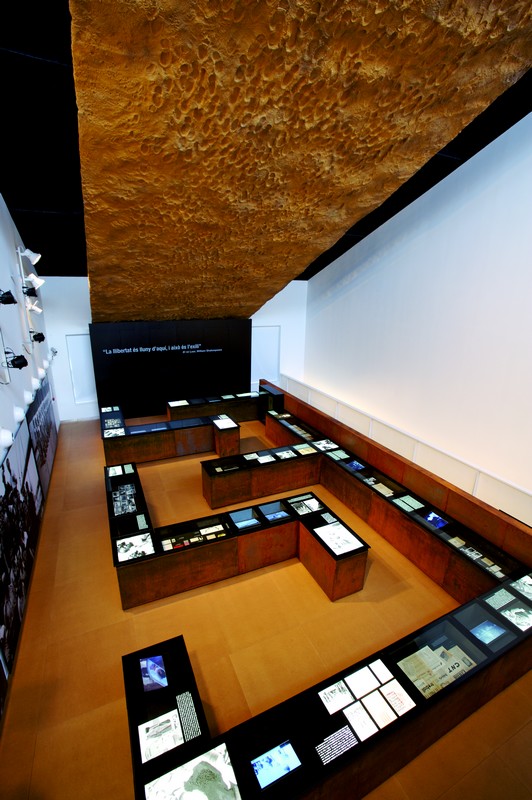 Footprints in the sand and the labyrinth of MUME

show the first few months of experience in

French concentration camps, and the labyrinth

vital road that started later and

in some cases, until today.

1. The Republican Exile in

For many Catalans and Spaniards, (with its colonies in included) became the first stage of their exile. For some, it was only a transit area to other destinations (other European countries, or, unfortunately, the Nazi concentration camps); for others it was a temporary residence before returning to , and for a considerable number it was a definitive country of adoption.

The first months of exile in were not easy for the hundreds of thousands of Spanish refugees. The had not anticipated an exodus of this size and was overwhelmed. The French concentration camps, initially for Republican soldiers, were also accommodating women and children... Simultaneously, the war wounded and mutilated had been sent to French hospitals. Once recovered, many of them were also sent to the refugee camps dispersed all over , although most were located in the area of .

The improvisation of the French authorities became clear in the living conditions of the concentration camps. They were often no more than beach extensions surrounded by barbed wire where the interns were crowded together in the open air and exposed to the inclemency of the weather, only protected by the holes they made themselves in the sand and by covering themselves as best they could with branches and cloths. All this with a survival diet, if it can be described as such, together with the abuses and violence of the camp guards, often of Senegalese and North African origin.

2. During the War. The Republican Exiles in the Context of the Second World War

A few months after the arrival of the Republican refugees in , the Second World War broke out. The of the Third Reich invaded on , which was the detonator of the conflict. On , , Luxemburg and, finally, France. The Franco-German armistice, signed in the on 22nd June, established the German occupation of much of French territory, basically the areas of the north, including , and the French Atlantic coast to the Spanish border. launched a great offensive on

It can be said that with the outbreak of the Second World War a new era began for the Republican refugees in French territory.

Some, in spring 1939, had voluntarily joined the Foreign Workers’ Groups (CTE). An enrolment that, as a minimum, offered a temporary reprieve from the harsh living conditions of the concentration camps. Although the working conditions in the war industry and the rural areas were very hard, those in these groups obtained in exchange a small wage, accommodation and more or less decent food.

With the Nazi occupation, some of them became a workforce for the German war industries. An example was the Todt Organisation, responsible for the fortification of the Atlantic coast. Around 9,000 ended up in Nazi concentration and extermination camps. Most did not survive the brutality of this internment.

Republican exiles’ time in the Nazi camps have left us some accounts of great historical and human value, such as the copies of the photographs that Francesc Boix developed secretly inside Mauthausen camp and were incriminating proof of great value in the Nuremberg Trials. Another of the essential first accounts of this experience was the novel K. L. Reich, written by the Mauthausen deportee Joaquim Amat-Piniella between 1945 and 1946 and published in 1963.

Other refugees were more or less forced to join the Foreign Legion or the infantry regiments and transferred to Algeria while, at the same time, a few thousand joined the ranks of the Allied armies. And an equally large group collaborated actively in the Resistance and the Maquis, participating in sabotage operations against German interests, activities that at the end of the Second World War earned them great respect among French citizens.

The Republican authorities in exile set up a series of bodies to help refugees with financial aid and to go to third countries. Notable among these bodies are basically two that would have a key role in the emigration of Spanish exiles to : the SERE (Spanish Refugee Evacuation Service) and JARE (Aid Board for Spanish Republicans), which, in their turn, would be another manifestation of the political tensions, divisions and splits that had weakened the .

These organisations did not escape the criticism of many of the refugees who saw how they basically helped exiles with resources, with determined political affinities and specific professional groups.

The main host country for exiles in was , where three great naval expeditions arrived, those of the Sinaia, the Mexique and the Ipanema, on board which were people such as Lluís Ferran de Pol, Marcel Santaló, Miquel Santaló, Avel.lí Artís Gener Tísner or Pere Calders, among others.

Other important contingents of exiles arrived in the on board the ships and De and in , where a unique expedition on board the arrived.

, , and were also host countries for Spanish exiles, although to lesser extent.

The exile in intensified once the Second World War had ended, with the painful realisation that the international community would not intervene to end the Franco dictatorship which had consolidated itself during the war.

4. The Franco Period and the Transition to Democracy

The background and vicissitudes of the Republican political institutions, as well as the political parties and the trade union organisations in exile, is a story of dissensions, fractures and continuous confrontations with weak and ephemeral formulas and attempts at political organisation, such as the constitution of the first and last Government of the Generalitat in exile in September 1945. Two years later, the successive dismissals of ministers, the internal discrepancies and the divorce between this Government of exile and the resistance to Franco from inside the country, brought about its dissolution. In exile, only the political institution of the President of the Generalitat was maintained. This post was occupied, after the tragic death of President Lluís Companys in 1940, by Josep Irla until 1954, when he was replaced by Josep Tarradellas, who was able to return to in 1977 as President of the re-established Generalitat.

The experience in the French Resistance against German occupation had encouraged many Republican exiles to continue the armed fight against Franco through guerrilla groups known as Maquis, who followed different political traditions, mainly anarchist, on the one hand, and the PCE-PSUC, on the other. Until the early 1950s, communists were very active, with frequent incursions into Spanish territory. The Maquis linked to anarchism continued, often individually, the armed fight a decade later. However, the low support of people for the Maquis condemned this initiative to its progressive and definitive disappearance in the early 1960s.

Although the political and military resistance to Franco from outside had meagre results, the same cannot be said about the cultural resistance, especially in relation to maintaining the Catalan language and culture, and also modern and liberal thought. Writers and intellectuals filled the pages of many newspapers and periodicals in Catalan most published in that, together with the newsletters of political organisations and associations, kept the flame of the language and culture alive abroad.

On , General Francisco Franco signed the communiqué that announced the end of the Spanish Civil War. A new era began in Spanish politics in the form of a fascist dictatorship based on the only party FET and the JONS, which had the support of two fundamental institutions to maintain the new regime: the Army and the Catholic Church. The effect of the civil conflict and the precarious situation aggravated by the autocratic economic policy during the first years of the dictatorship, together with the Franco regime’s harsh repression of any real or imagined threat to its continuity, created in that first post-war period a passive society resigned to the new political situation.

It was not until the end of the 1950s and early 1960s that the clandestine political fight intensified, especially given the evidence that the evolution of international politics and some weaknesses in the dictatorship itself would sooner or later lead to a political turnaround.

The dictatorial regime that many Catalan and Spanish citizens, especially exiles, had trusted would disappear with the end of the Second World War with the defeat of the Axis countries, allied with Franco during the Civil War, continued for more than three decades. The death of the dictator on , together with the weakness of Franco’s institutions and the secret activism of political and cultural organisations, led to a certain opening of the authoritarian regime. Progressively, thanks to mobilisations in the street and the negotiations between the elites of the opposing organisations and the high ranking officers of the dictatorship, a path of transition was opened which contained elements of both rupture and pact. With the coming into force of the Spanish Constitution of 1978, the old dictatorial order was dissolved.