The Catalan Cultural Exile in 1939 (Agullana) 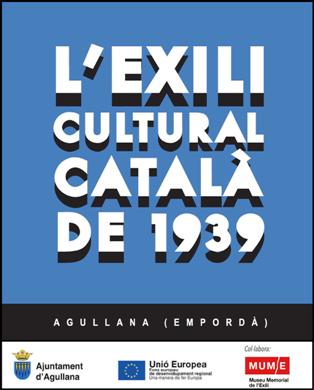 The project to carry out a permanent exhibition on Catalan cultural exile in the municipality of Agullana begins in 2010, when a first document prepared by the curator Enric Pujol and the designer and artist Marcel Dalmau was presented. From the first moment it had the support of the City Council, but until recently it has not been financially possible, thanks to the municipal interest and with the help of the European Regional Development Fund (ERDF)

The reasons for locating it in the municipality of Agullana are obvious, since it was one of the most emblematic points of the great republican exodus of 1939. Just think of the mythical Mas Perxés, who housed the main political leaders of the government of the Generalitat, with Lluís Companys at the head, and a good part of the intelligentsia of the time during the great republican retreat. This mas and the name of the municipality of Agullana were immortalized by the intellectual and politician Antoni Rovira i Virgili in his work The Last Days of Republican Catalonia, one of the first witnesses to the Catalan republican exodus.

In the neighboring municipality of La Jonquera a few years ago the Exile Memorial Museum (MUME) has been inaugurated. The good existing understanding must allow an activation of the potentiality of both centers. The MUME is basically focused on the political-social aspect of the phenomenon. Thus, the treatment of the cultural aspect that is done in Agullana is an ideal complement for anyone who has already attended the La Junquera museum. And vice versa. For this, a collaboration and advisory agreement has been made that favors both parties.

The permanent exhibition occupies the entire first floor of a building located in the most central place of the population, the Plaza Mayor, in front of the church. Currently, a permanent exhibition dedicated to an exceptional archaeological find is located on the ground floor of the aforementioned building: the necropolis from the time of transition from bronze to iron in Can Bech de Baix. The circumstance of hosting on the lower floor a representative sample of our more distant past and on the upper floor a permanent exhibition referring to our contemporary history undoubtedly constitutes a pedagogical incentive of the highest order when it comes to explaining our history, especially as to a school audience.

The basic objective is to create a permanent exhibition space that becomes a benchmark for the Catalan ensemble. In such a way that this cultural installation becomes a pole of attraction that contributes to the development of the population.

The main recipient of the center should be what we call "large public", since what is intended is to make known the importance and significance of cultural exile to as many people as possible. However, the center will have a double reading level: elementary and more specialized. For this, information is offered "à la carte", according to the interest of each one.

The new exhibition space has different resources, from period documents to audiovisual media, to give an overview of the issue that is highly attractive and affordable for the general public.

In this sense, we must highlight the three films made by the director Gerard Bagué, focused on three fundamental questions. The first, which is entitled the same as the exhibition, The Catalan Cultural Exile of 1939, collects the opinion of different specialists on the importance and general characteristics that it had. The second entitled The Literary Exile: Testimony, Reflection, Creation ... is a short anthology of selected texts by the most important authors, complemented by the photographs of Georges Bartolí and Sandra Genís. The third, Exiled Art, is a review of the Catalan plastic artists who best collected, in their own work, the experience of exile or who were most affected (J. Franch Clapers, J. Subirats, Josep Bartolí, Carles Fontserè, Josep Renau , Helios Gómez, Joaquín Vicens Gironella, Virgili Batlle, Joan Jordà ...). If we add the duration of the three films, which are presented in different areas of the exhibition, we find a projection that exceeds 60 minutes

The view that different current artists have had from exile has also been taken into account and for this reason works by Isabel Banal, Sandra Genís, Georges Bartolí, Alfred Mauve, Joan Barbarà and Miquel Duran have been integrated into the exhibition.

This introductory space allows the public, from the moment they climb the stairs, to find themselves immersed in the theme at hand. It is an installation that uses a powerful image taken from a cover of the revival magazine (work by Francesc Domingo on the front wall and the reproduction of different covers of books published in exile on the lateral parts (taken from the Library of Port de la Selva. Hipólito Nadal Mallol Collection). Once up the stairs, a large showcase with vintage weapons, wants to show that, once the war was over, it was culture that became the great tool of resistance, to the detriment of weapons.

Area 2: The Albera’s, territory of exile

On the landing, the space is dedicated to the territory that houses the exhibition. A map of both sides of the Albera’s shows the main names that had to do with the subject at hand.

In the display case, special attention is devoted to Mas Perxés, with a photo of Alfred Mauve and testimonies of relevant writers. An installation of Isabel Banal's sculptures completes the scope.

The panels are dedicated to explaining the main stages of cultural exile. The phrases at the top of the wall, which are also found in the other areas, serve as reinforcement. On the first screen we find, you can see the first recording, the one dedicated to general characteristics. In the showcases, there are original copies of the main exile publications

The main idea is given by the text that heads the scope:

"In exile, the" cream "of the Catalan intelligentsia, who were well aware of the attempt of cultural genocide that Francoism wanted to impose, went away. One of the sectors most affected was education. Not surprisingly, the renovation and the Catalanization of all educational levels was one of the most brilliant achievements of the republican period. Fortunately, many teachers, professors, philosophers, historians, geographers, doctors, intellectuals ... were able to make decisive contributions in the countries that hosted them and they were able to be directly influenced by the renovating currents that arose after the Second World War”.

In the showcases it has been possible to obtain material made by the teachers who taught a large number of adults incarcerated in the French concentration camps.

A section of this field is dedicated to exile literature, which featured top-notch authors and works (Pompeu Fabra, Josep Carner, Carles Riba, Mercè Rodoreda, Joan Oliver, J. Amat-Piniella, Bladé Desumvila, Xavier Benguerel ...). The anthological recording that we mentioned at the beginning is shown on the monitor at the entrance. The panels and showcases have tried to show the excellent pairing that existed between writers and plastic artists.

The third of the recordings made, the one dedicated to exiled art, is projected on the large screen on the back wall of the room. On the side wall, in a showcase, there are original drawings by Josep Narro, Molné and Guasp. In a corner space of the room there is a small section dedicated to music, where the figure of Pau Casals stood out.